Norbert de Patek was a Polish refugee who was exiled and settled to Geneva in 1830. After nine years of living in the watchmaking capital of the world, he opened his own shop with the help of a friend. The first revolutionary product of the Genevian company was the key-less watch. Once such a watch was acquired by Queen Victoria, the company’s popularity grew and it became one of the most prestigious watchmaking companies in the world. Over the years, Patek Philippe released numerous other revolutionary watches. One of the most complicated watches ever made is the Patek Philippe Supercomplication 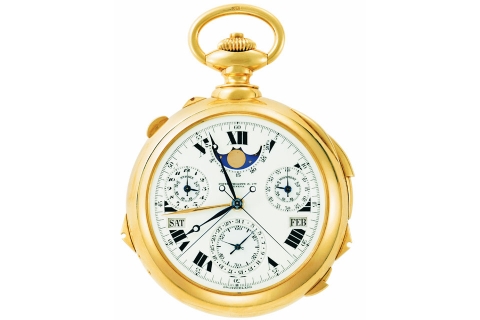 Components and features
The Patek Philippe Supercomplication was designed using the traditional watchmaking techniques used for hundreds of years as well as some other revolutionary techniques. It contains 900 components and aside from time telling it features another 24 functions such as a different chronological function for each hour, a minute repeater with chimes that play the Big Ben melody or a chart of New York city sky. Furthermore, the 18 carat gold watch is beautifully handcrafted and finished. This spectacular watch is not only a time telling piece but it is also an exclusive jewelry item worthy of a royal family member.

Price
The Patek Philippe Supercomplication is by far the most expensive watch produced by the Genevian company. As we mentioned above, the watch was auctioned in 1993 but the name of the new proprietor remained unknown for a long time. However, the price that was paid in order to acquire the watch was far from being a secret. The sophisticated time telling piece was bought for the astonishing sum of $11,002,500. A few years later it was discovered that the person who bought the watch and who still owns it is Sheikh Saud Bin Mohammed Bin Ali Al-Thani of the Royal Qatari Family.