The Most Famous Abstract Artists

Abstract expressionism is a post–World War II American art movement developed during the 40s in New York. This movement was the first to achieve international influence and transform New York into the art center of the western world, a title previously held by Paris. This art form values the unknown over the known, the individual over society, expression over perfection, the inner over the outer and the veiled over the clear. These are 3 of the most famous abstract artists in the world:

Paul Jackson Pollock is considered one of the most famous abstract artists because of his unique drip painting, a style that he abruptly abandoned at the peak of his fame. The influential American painter was a major figure in the abstract expressionist movement, although he also enjoyed considerable notoriety. Pollock struggled with alcoholism for most of his career and life because of his volatile personality. He married Lee Krasner in 1945, also a famous abstract artist who became his muse and critic, greatly influencing his career. Jackson Pollock’s most notable paintings were made between 1947 and 1950, during the drip period. After 1951 he mainly used darker colors, printing in black on unprimed canvases. Later he returned to color and moved to a more commercial gallery, because there was a great demand for his work. Due to the increased stress and pressure, his alcoholism aggravated. Pollock painted his last two artworks in 1955, Scent and Search.

Willem de Kooning was an American abstract expressionist artist born in Rotterdam. Despite his Dutch heritage, he is considered one of the most famous abstract artists in the U.S. Kooning painted in the post-World War II era in a style later called Action painting or abstract expressionism. His style was based on ambiguity and complex figures. In most of Kooning’s paintings background figures overlap other figures, which in turn are overlapped by dripping paint lines, thus creating the effect of multiple foregrounds. Kooning painted women regularly between 1947 and 1949. After this period, he explored this subject exclusively. In 1964 the artist was awarded the Presidential Medal of Freedom and in 1986 the National Medal of Arts. Kooning and Eduardo Chillida were presented with the Andrew W. Mellon Prize in 1986 at the Carnegie Institute. His first solo show took place in 1948 at the Charles Egan Gallery in New York. Many museum retrospectives followed, including the Whitney Museum of American Art, the National Gallery of Art and the Museum of Modern Art. 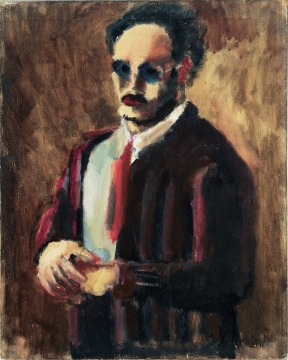 Along with Jackson Pollock and Willem de Kooning, Mark Rothko is one of the most famous abstract artists in the postwar period. This American painter of Latvian Jewish descent rejected the label of an abstract expressionist, although he is generally identified as an abstract artist. Rothko explored subjects other than nature and urban scenes because he feared the modern painting has reached a conceptual blockage. He found it necessary to create gods, demigods, hybrids and monsters in the same way as the modern man found intermediaries in the Communist Party and Fascism, stating that without these mythical creatures art cannot enact a drama. Rothko was also inspired by Nietzsche and Freud, believing that art can free unconscious energies that were previously liberated by mythological elements.