The benefits of learning Creole

When it comes to learning a foreign language, many people steer their attention towards languages that are commonly used and spoken around the world, such as English, for those born in countries with a different native language, Spanish, German, Portuguese or French. Fewer people consider learning Japanese for instance or Flemish and even fewer think about taking a Haitian Creole class. Nevertheless, learning and even mastering a language that is less used and that very few people know, except for those living in that country, can have its benefits and these may turn into real opportunities. Sure, finding courses for these languages may be a bit more difficult than finding, let’s say, a French class, but we live in the Internet era now and there is nothing that one can not find online, including foreign language lessons and courses. 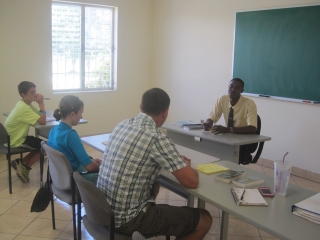 One of the first reasons for which you should consider learning a foreign language that is infrequent, like taking a Creole class for example, is that you will gain a competitive advantage for a series of job opportunities, especially in the translation field. We live in a highly globalized economy now and there are companies from all parts of the world that come into contact with the more developed nations, trading and doing business and at some point, there may be a job opening for a translator from English to Creole or the other way around. If not, you can always try working at the UN as an interpreter. Whatever the case, a language like that always looks good on a CV and catches the eye a lot faster and makes a greater impact that having French or Spanish written under foreign languages, because many know those. Learning and knowing how to speak such a language can open doors that you don’t even know they exist, so taking the time and effort to learn them is definitely worth it. The only difficulty may be, as mentioned above, finding a course or a class to take.

Another advantage of learning Haitian Creole, or any other such language for that matter, is, obviously, the fact that you will be able to communicate freely and easily with people from that country. Whether you are considering signing up for volunteer programs or traveling to that country or even exploring job opportunities there, the fact that you already know the language is always a plus. It will give you an advantage that will surely come in handy, whatever your plans may be. All things considered, whether you take a Creole class, Mandarin lessons or any other particular language, the benefits that come with such knowledge are undeniable, both at educational level and as far as career opportunities are concerned. And, since we live in the technological era, you can even take these classes online, which further facilitate your learning experience.

How to Choose a Scoring Table for the School Gymnasium
April 5, 2017
The Pros and Cons of Catholic Schools
November 14, 2013
The Advantages of Bilingual Education
November 14, 2013
5 Reasons to Get Kids Cooking
September 30, 2013
Go to Top