Most Popular Short Haircuts in History

Women have been wearing short haircuts for a long time now. In the past, long hair was considered to be a symbol of beauty but this concept changed when women started to transform their role in the society. As always, the pioneers of style were the celebrities who had no problem letting go of their long hair in order to sport classy and elegant short hairstyles. In this article we will present the most popular short haircuts in history.

The golden age of Hollywood gave birth to a lot of iconic looks. One of the most representative classical beauties was Audrey Hepburn. An unconventional spirit, Audrey was never fond of long hair or high heels. She enjoyed short hair and flat shoes but she always managed to look glamorous in any situation. The pixie cut that she wore in Roman Holiday is one of the most popular short hairstyles for women in the history of the cinema. That hairstyle was her signature look for a long time and it was quickly adopted by a lot of women. The pixie cut continues to be a popular hairstyle although it has been reinvented on numerous occasions. When it comes to famous short hairstyles, Audrey’s various bob haircuts have definitely stood the test of time and became one of the most popular short hairstyles for women.

There are many impressing short hairstyles in the history of the cinema. Some passed away unnoticed while others will always’ be in our mind. Louse Brooks’ original helmet is one of the most popular short hairstyles in Hollywood. It is a look that has been associated mostly with the cabaret style but it has been reinvented into more modern hairstyles. One thing is for sure: nobody has ever managed to wear the helmet with as much class and style as Louse Brooks.

Twiggy is known to be the most popular fashion icon of the 60s and her unique short haircut played an important part in this role. According to the urban legends, miss Lesley Hornby got that unique haircut at the age of 15 and she spent a total of 8 hours in a London hair salon in order to complete her look. Well, we doubt that any hair stylist would be willing to spend that much time on a client nowadays. However, we are sure that a similar haircut can be obtained with less effort. The twiggy hair style hasn’t been seen in a while but we are sure that it would be very fashionable this season if anyone dares to try it on. After all, it is the look that turned a teenage girl into a fashion phenomenon.

The bob hairstyle if probably one of the most beloved hair styles of the moment. However, few people still remember that this haircut has been worn by one of the most important Hollywood divas: Bette Davis. The great thing about Bette Davis’ bob is its curly look which could be styled in a casual way as well as in a glamorous way. This look could be adapted to the current trends if we replaced the small curls with bigger wavier curls.

Victoria Beckham is one of the most influential fashion icons. Over the years she has lunched numerous trends and some styles were even associated with her. For example, her overly reinvented bob has become her signature sign and she can’t seem to let go of it. Whenever she gets bored with her long hair she makes a fresh new appearance sporting a brand new bob hairstyle. Whether it is asymmetrical or layered, Victoria’s bob always looks flawless.

A lot of child stars are associated with the image from the movies that made them famous. Some of them are so attached to their initial success look that they are unable to move on with their career. Well, that was not the case of Emma Watson who dramatically changed her look as soon as she was done with the Harry Potter series. She cut her wavy curls and choose a boyish pixie cut that perfectly fits her British elegance. The new look also makes her look more mature, as if she is ready for more challenging roles.

Rihanna started her career like any normal teenage girl: with catchy songs and long wavy girl. However, as soon as success settled in, Rihanna started to explore more sides of her personality which she expressed through her unique clothes and her many hairstyles. Her asymmetrical bob was one of her most popular hairstyles and it was adopted by countless female fans.

There are few contemporary actresses who manage to emanate the classical beauty of Hollywood’s golden age. However, Audrey Tautou is one of the most elegant and sophisticated actresses and her unique beauty reminds us of some of the most enchanting Hollywood divas. Her 2006 gamine cut was incredibly stylish and it fitted her perfectly, making her look like a modern day Audrey Hepburn. Her new look was perfect for replacing Nicole Kidman as the face of Chanel No.5.

When we think of Halle Berry we can’t help but associate her with the pixie cut that made her famous. Despite the fact that over the years she made some attempts to let her hair grow longer, she always returned to short hairstyles which suited her so much better. She first cut her hair in 1989 and her manager told her that it was a huge mistake and that she would never again find work. However, the short hair made her stand out in the sea of long haired actresses and it helped her create her unique image. Furthermore, the short hair makes her look ageless and we think that she will stick to it for a long time. Out of all the short hairstyles that Halle Berry tried out, out favorite one was her flaming pixie crop.

If we were to pick a contemporary model that would resemble the unique style of Twiggy than that would definitely be Agyness Deyn. Not only is she a unique beauty but she also has a strong personality which is expressed through her many crazy short hairstyles. She is a model for many teenage girls who are experimenting with their style according to their mood. In fact, Agyness has confessed that she changes her hair according to the way she is feeling. She has also said that her hair is another way of expressing her personality, in addition to the way she dresses.

Keira Knighteey was still filming Pride and prejudice when she cut her long hair for her next movie. She had to wear a wig during the final scenes but at the movie’s premier she revealed her new look. There are not many women who look better with short hair than with long hair but in our opinion Keira Knightley should never again let her hair grow long. The layered pixie cut is perfect for her elegant British style and the ombre highlights are ideal for her peachy skin. 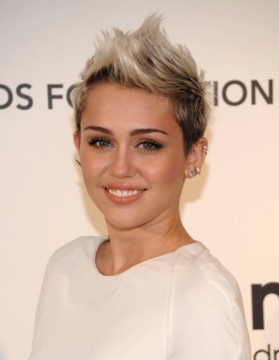 Miley Cyrus was another child star who was in a rush to grow up and as soon as her Disney contract ended, Miley dramatically changed her look. She cut her wavy hair in favor of an asymmetrical crop. The big surprise was that the new haircut suited her perfectly. Her new personality is also reflected by her more aggressive clothes and more mature songs. She is currently going through numerous styles in an attempt to find her own individuality. We hope that she will stick with short hairstyles, no matter how her style will change over the next years.

As you can see, Hollywood is the place where beauty can be found in all shapes. The ladies presented above have shown in numerous occasions that you don’t need to have long hair in order to look elegant and classy. All you need is a powerful personality and a little creativity in order to toy with various short hairstyles. These are the most popular short hairstyles in Hollywood’s history. We hope that they will inspire you to choose a daring short hairstyle.

Simple tricks to look stylish even during the winter
September 4, 2018

Dress to impress: fashion guidelines every man should follow
June 1, 2018