Automobiles are undergoing a major transition at the moment as the development of vehicles with alternative sources of energy is growing as the days pass. Momentarily, battery-powered EVs and hydrogen fuel cell EVs are the technologies competing for the ‘crown’ and with new models emerging, more people are drawn towards the alternative driving means.

Regardless of your stance, whether you are a supporter of the BEVs Tesla manufactures or you are more inclined toward giving fuel cell EVs a chance, everyone wins in the end as air quality is enhanced by the Eco-friendly means of transportation, while the general carbon footprint is reduced. As petrol and diesel engines are the biggest urban pollutants, these green alternatives are the logical solution. 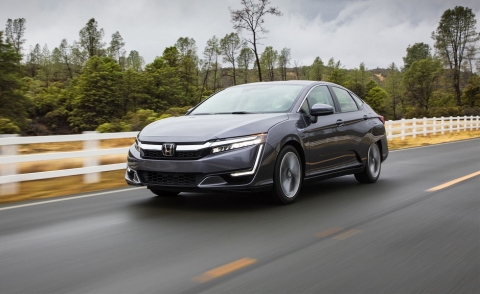 Differences between the 3 car types:

Honda, Hyundai, and Toyota – What the big players put out

Currently, there are only 3 automakers with hydrogen fuel-cell cars available for sale on the market: Honda with the Clarity model, Hyundai with the ix35, and Toyota with the Mirai. Moreover, Mercedes-Benz is working on a plug-in hybrid SUV that combines the best of both worlds, a fuel-cell generator, and a battery pack, while other automakers are developing various fuel cell vehicles to be released in the near future. Consequently, there will be plenty of options to pick between in the following years in case you aren’t satisfied with what the market offers at the moment.

Woefully, there is the problem of infrastructure and demand as FCEVs need dedicated refilling stations as opposed to BEVs which can even be charged at home. Considering that hydrogen filling stations aren’t cheap to build, there is a momentary issue with these cars. The Government promises to have 65 stations open to the public across the UK by 2020, and the situation isn’t any better in other major European countries or even in the U.S. for that matter. Nevertheless, this problem will be solved in a matter of years, especially if demand and general public interest keep rising.

Is Elon Musk right in his statements?

Elon Musk is a prominent figure in the automotive industry, and whether some like it or not, many people listen to his opinion, follow his tweets, and any other live or online commentary he delivers. When Musk stated back in 2015 that he opposes fuel-cell vehicles, some considered his view as biased as his own brand of BEVs is threatened by the new alternative energy source automobiles. However, you cannot deny that there is truth to Musk’s statement, particularly as he gave 3 strong arguments to back his claim – that fueling infrastructure isn’t strong for hydrogen cars, the source has a nonrenewable nature, and there are safety concerns with hydrogen as opposed to the lithium-ion batteries used in BEVs.

The 5 Big Mistakes People Make When Buying a Car
February 8, 2021

How To Boost the Performance of Your Diesel Engine
April 25, 2020