In the history of rock music, there have been many notable deaths. Some artists passed away quite young, while others died of a broken heart after their loved ones perished. No matter how they left the music scene, these 5 iconic figures left their mark on music.

Johnny Cash was the most influential American singer and songwriter of the 20th century. Although most remember him as a country icon, his songs spanned other genres, including rockabilly and rock and roll in his early career, but also folk, blues and gospel. Cash influenced numerous artists and left an impressive legacy. Also known as The Man in Black, because of his dark performance clothing, the musician had an anti-authoritarian stance and a rebellious image influenced by punk rock. He received the honor of induction in the the Rock and Roll Hall of Fame and Country Music Hall of Fame. Johnny Cash died on September 12, shortly after his wife June. Many believe that he actually died from a broken heart over his sweetheart’s death.

Freddie Mercury was a British singer, songwriter and lead vocalist of the rock band Queen. His powerful vocals over a four-octave range and flamboyant stage persona made him famous throughout the world. He also led a solo career, occasionally working as a producer and sometimes as a guest musician, playing the piano or vocals for other artists. The rock music icon died on 24 November 1991, one day after announcing that he had AIDS. However, Mercury knew that he was losing the battle against the disease when he recorded Innuendo in 1990. The song lyrics to These Are The Days Of Our Lives and The Show Must Go On strongly reflect this. 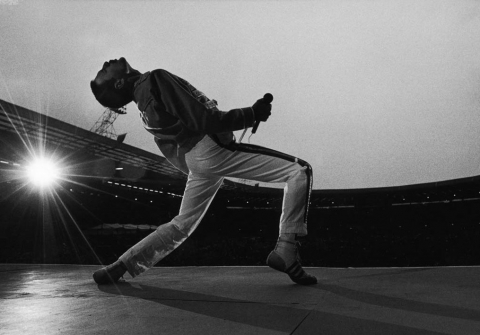 Elvis Aaron Presley, also known as the King of Rock and Roll, or just the King, was an American musician, actor and singer. He is one of the most celebrated rock music artists of the 20th century and winner of 3 Grammys, including the Grammy Lifetime Achievement Award at age 36. Presley’s cultural range of music amplified to the point when it included popular hits, pure country gospel, dirty blues and patriotic recitals. Unfortunately, he passed away too soon, at the age of 42 because of heart complications.

The drummer of Led Zeppelin, John Bonham was esteemed for his great power, speed, distinctive sound, feel for the groove and fast right foot. He is considered on of the greatest drummers in the history of rock music and the best drummer of all time, according to Rolling Stone. On 24 September 1980, Bonham stopped for breakfast and drank four quadruple vodkas, equivalent of 16 shots. After rehearsing and drinking all day, someone took him to bed and placed him on one side. The next day, John Paul Jones found him dead.

Is a levitating speaker worth the investment?
February 19, 2016