Asparagus is a perennial plant grown mostly as a vegetable crop and used in cooking; it is common in most of Europe, Asia and Africa, but in America as well. This delicious herbaceous is used in both traditional and modern cuisine, and its special flavors make it a delicacy. In what follows we are going to see what cooking asparagus is all about, and what methods of preparation are indicated. But first, let us take a short look at what makes this veggie so good and healthy and see why it shouldn’t miss from our diets.

First of all, because it is very rich in vitamins B6 and C, as well as fiber and folate; moreover, the glutathione in its composition is a great antioxidant and anti-carcinogenic, so it can help us not only maintain our health, but improve it as well. There are three types of asparagus: white, purple and green, with the latter being more common. Because it is perennial, fresh asparagus can only be found from February until April or May, when it is also more delicious and a bit more affordable. Usually, you can find it canned all year-round, but cooking asparagus fresh is much tastier and full of vitamins.

Before you need to learn cooking asparagus, you need to learn picking it; some people prefer it thicker, whereas others prefer it thin. Both variants are good, but the thick one has woodier ends which have to be removed anyway. What you need to look for when you’re shopping for asparagus is to find pieces which are firm and uniform, with closed tips. It is usually recommended that you cook asparagus as fresh as possible, because it won’t last more than a day or two in your refrigerator. However, if you want to store it for a while, put it in a bowl of cold water, or wrap the tips in a moist paper towel.

Now let us look at what has to happen when you’re cooking asparagus; to begin with, you have to rinse the asparagus spears and cut or break the tough ends. From here on, opinions about how asparagus is best consumed are divided, and you can basically use it for anything. If you’re an asparagus purist, then you can just boil it and serve it with a dash of olive oil, or some cheese sauce. But asparagus can also be used for pasta, soups, salads, scrambled eggs, risottos, stir-fries and others. 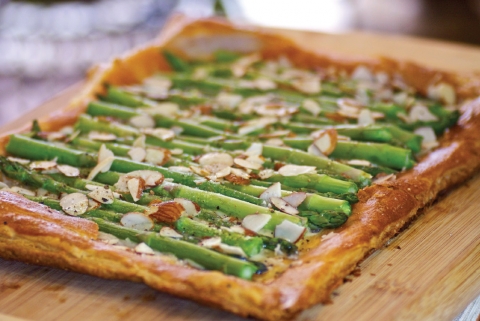 As for preparation methods, some of the most common are boiling and steaming; if you don’t have an asparagus steamer, then you can tie them in a bundle and put them in a tall pot with just two inches of water. Make them stand in the pot and put the lid over them. They should steam for five or eight minutes, and at the end they should be bright green and crisp. For boiling, you lay them down in a pot with one inch of water and they should be boiled in about five minutes. Grilling, microwaving, frying or roasting are just as good methods to cook asparagus, and there are numerous recipes that you can try.