The first five fine arts, painting, architecture, music, poetry and sculpture developed in the 17th century primarily for aesthetics. Because they also have a practical function, fine arts are different from applied arts. Nowadays, some additional forms are included in this category: photography, printmaking and conceptual art.

Because it refers to photographs that fulfill the creative vision of the artists, fine art photography stands in contrast with commercial photography or photojournalism. Besides their creative and artistic purposes, this art has played an important role in advancing certain causes. Ansel Adams, one of the most widely recognized fine artist in photography, provides the best example with this work in Yosemite and Yellowstone National Parks. Furthermore, his photographs increased the public awareness of the issue of Sierra Nevada, thus helping build political support and protection for this beautiful region.

Besides being a fine artist, photographer and environmentalist, Ansel Adams developed the Zone System used to adjust the contrast and determine the proper exposure of a final print. His black and white photographs of the American landscapes are characterized by depth and clarity. Ansel mainly used large format cameras with a high resolution to ensure the sharpness of the photographs. He did not work only in black and white, shooting colored portraits and landscape architecture.

The fine artist preferred black and white because he felt like the color could be distracting, diverting the photographer’s attention and preventing him from reaching his full potential. He believed that he could achieve a greater sense of color through a black and white photography that is well planned than with a colored film. Ansel could accomplish this because he was a master of control. He wrote books about technique and developed the idea of previsualization, a method that allows photographers to image final prints before he even taking the shot. These concepts allowed the fine artist to have control of all the potential variables involved with a print. Color lacked the elements he had mastered with the black and white techniques.

Although other landscape artists such as Thomas Moran, Albert Bierstadt, George Fiske and Carleton Watkins portrayed the Yosemite and Grand Canyon, it was Adam’s black and white pictures that became the proof of how National Parks were before the tourism industry grew. His persistent advocacy contributed to the expansion of the national Park system, due to the fact that he realized that the shrinking of the noble forests, the erosion of the soil and the depletion of fish are catastrophes that leave deep scars on the spirit of people. Because the wilderness is pushed back, the vital solitude is almost nowhere to be found. 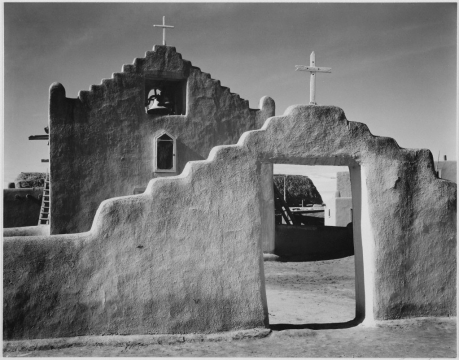